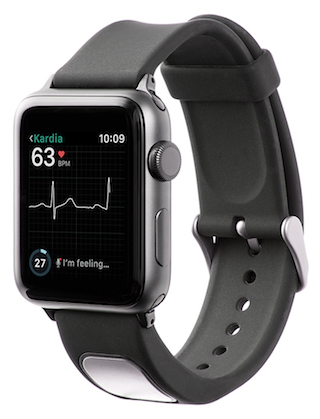 AliveCor has launched (and received FDA clearance for) a new ECG sensor built into an Apple Watch strap, as well as an Apple Watch app on which users can see their ECG in near real-time.

The strap, called KardiaBand, is an upgraded version of a product that launched in Europe last year. But in addition to the band, AliveCor is launching SmartRhythm, a software that continuously measures heart rate on the Watch, then prompts the user to record an ECG when the heart rate data suggests a possible arrhythmia.

“Fitbits, Apple Watches, Garmin watches, Polar watches, many of them contain a heart rate sensor called a PPG,” AliveCor CEO Vic Gundotra told MobiHealthNews. “These things measure heart rate, which is great for exercise. … But doctors don’t look at heart rate as a diagnostic tool. They want to see the electrocardiogram before they make any diagnosis. So the PPG sensor has been, from a medical standpoint, largely useless.”

AliveCor’s app measures heart rate continuously and runs that data through an algorithm trained on a deep learning neural network every five seconds. If the network finds the data isn’t what it should be, taking into account other factors like time of day and activity, it prompts the user to record an ECG.

“If your heart rate goes outside the predicted values of our deep neural network, we fire an alert that says ‘This would be a good time to take an ECG’. And when you press record ECG, we flip into the FDA-regulated mode and then we record your ECG. Then when you flip back we show you if we detected possible atrial fibrillation it’ll be orange, or if it’s normal it’ll be green.”

Gundotra says that the technology is unprecedented because the ECG is the first test a doctor would want to run in response to a heart rate irregularity. With AliveCor, the user can capture that reading right away rather than hoping the arrhythmia sticks around until they can get to a doctor’s office.

“These other watches might tell you your heart rate is weird, but what do you do about it?” he said. “Are you going to go to the hospital and tell them ‘My watch told me my heart rate was over some threshold, what am I supposed to do?’ Here, we fire a notification and you can do something. You can do what your doctor would do as soon as you got to the hospital, which is fire an ECG.”

Other companies — and AliveCor itself, for that matter — are looking at ways to eliminate the middleman and detect atrial fibrillation directly from heart rate data. In fact Cardiogram has made great progress on that front, publishing a paper recently that shows 97 percent accuracy in atrial fibrillation detection.

But Gundotra thinks that technology is at least a year away (plus the time it takes to clear FDA), and even when it exists, there’s no guarantee doctors will accept it.

Additionally, AliveCor’s system can send an ECG to a doctor even if the algorithm doesn’t detect atrial fibrillation, which means the technology often leads patients to receive more obscure diagnoses that otherwise might have been missed. In other words, PPG-only approaches will have to be able to detect more than just atrial fibrillation.

Kardia Band is available today for $199, though to use it customers will also have to sign up for AliveCor’s $99 per year premium service, which includes storage for unlimited recordings, use of the company’s algorithms, and a paper report mailed to the user each month.